Delving into the history of ancestors’ lives, I try to extend my genealogy knowledge to ethnographic issues. An ideal source for this purpose, is to go deep into the elaborations of the famous ethnographer Seweryn Udziela, who lived in the years 1857-1937.

Seweryn Udziela was a researcher and popularizer of folklore and folk culture of Lesser Poland/ Małopolska.

The Ethnographic Museum in Krakow bears his name.

Krakowiacy in the description of Seweryn Udziela based on excerpts from his book, published in 1924.

The area around Krakow is several dozen kilometers and is inhabited by people who are native to Poland, and who are called Krakowiacy or Krakusy.

Krakowiacy border south with highlanders and live more or less to the highway, running from Biała to Wadowiec, Kalwaria Zbrzydowska and Lipnica, from the west they are neighbors with Silesians, from the east with Lasowiacy or Sandomierzanie, and from the north they reach the line running from Częstochowa outside Kielce.

This area is inhabited by the Krakowiacy, about 2,000 smaller and larger villages and several cities with Krakow in the foreground.

The Krakow region is rich in beautiful landscapes. The surroundings of Kraków, Kalwaria Zebrzydowska are beautiful, and an equal to the beauty of the Ojcowska valley can not be found easily. 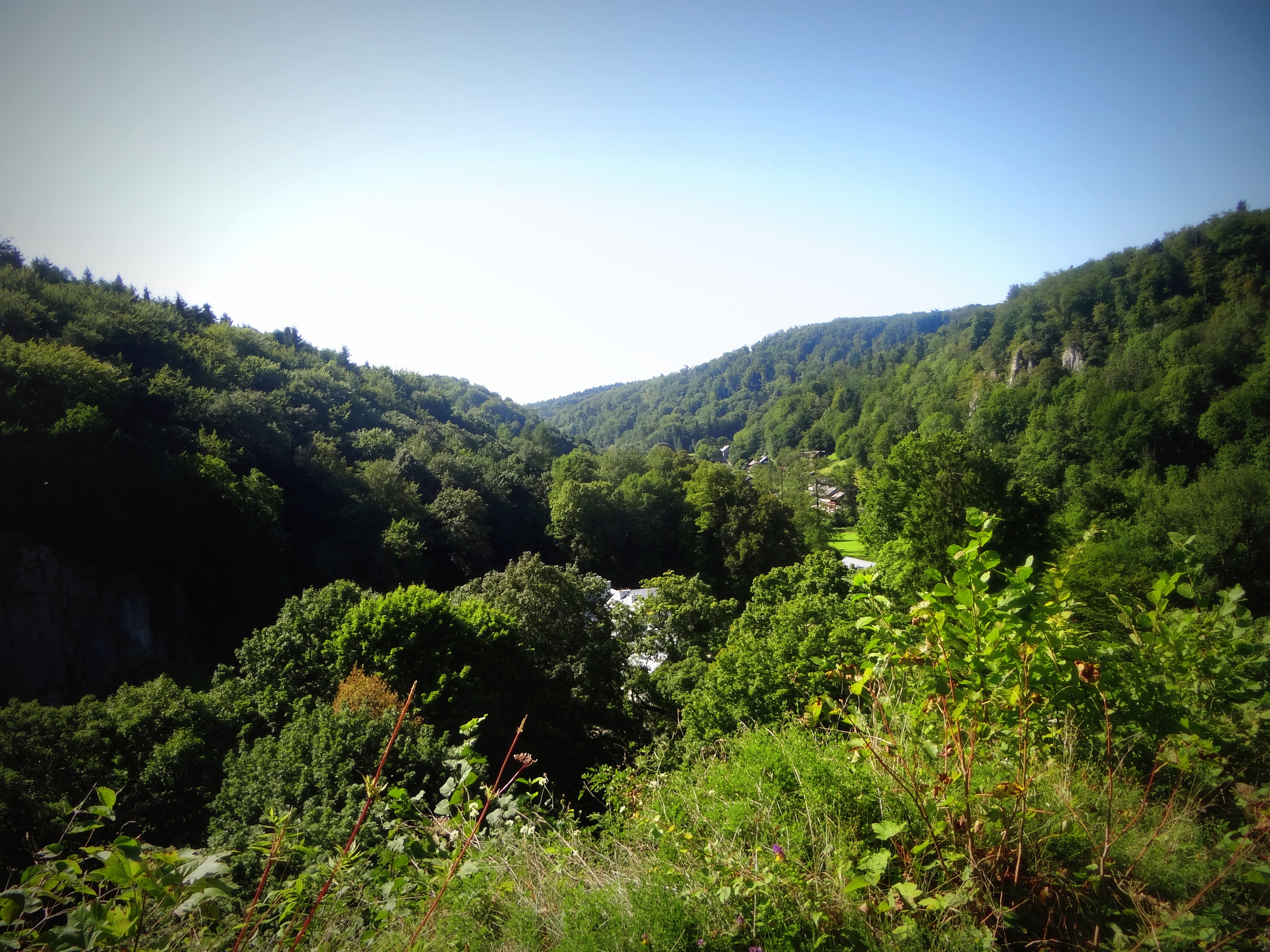 A Krakowiak is of medium height, broad, muscular, stocky, with a beautiful, shapely head, oval face with beautiful, gentle features, the eyes are blue and the nose is prominent.

The hair always bright in children, later darken, hence there are more brunettes.

Older men wear long hair, dropped to the neck, over the forehead evenly cut, and a beautiful mustache, but shave the beards. The features of their faces are handsome; sometimes men are prettier than women. The expression of the face and eyes prudent and alive.

The population attached very much to the family place. This also leaves them reluctantly, only as a last resort, when it is impossible to earn a piece of bread on the family land.

The poorest Krakowiak sighs all his life to his own furrow of the earth. He is hard-working, persistent, does not give in to difficulties, he is economical and hesitant. He tries to make extra personal possessions, but at the same time he is hospitable and likes to show himself.

A Krakowiak is patient, gifted and alive, he expresses himself clearly and understandably, he likes music, dancing and singing. He sings at work and while playing. Occasional chants are easily created.

He loves horses and rides on horseback from early childhood and likes riding; the best in the army uhlan.

He loves his country and is courageous, and as many as the enemy denied his fatherland, Krakowiak always kidnapped and fought the enemy, enduring all war effort with perseverance.

The population of Kraków land is very significant, as it reaches 250 inhabitants per square kilometer, so is has the highest density in Poland.

The villages scattered gently, lie close to one another, and the land between them is cut into plots, as if chess-like.

The entire village is drowning in a grove of willows, melons, lindens, or among orchards, among which the dark thatch huts, perched low above the ground, and look out of the window with small like eyes, what is going on outside, on the road, in the field and meadow floral.

Like a flock of crows plowed, the huts sat at the top of the hill, hills, or even a hump of land, facing the head and shutters to the south, to the sun, so that the house was bright and cheerful. Here and there, a lonely cottage runs out into the field, but usually only the manor is alone behind the village. A church with a sparrow-like stem stands out from the limes at the end of the village. Beside him there is a presbytery, a tavern and a shop nearby.

The richer farmer has a barn and stable, and around the orchard where apple trees, pear trees and plum trees dominate, sometimes the walnut will also make itself comfortable in the yard.

In front of the windows is a small floral wreath, with hollyhocks, marigolds, larkspur, next to a vegetable patch.

In the farmer’s yard we can find a brick basement, a covered roof, and a pond, so that the ducks would have fun, and the housekeeper could rinse the dishes.

Wells are found only in lower-lying villages: there are wells with a crane, with a bucket on a chain, or shallower plates bound in the hull, and the water draws with a watering can, sometimes on a wooden ball attached.

A cottage in Krakow, sometimes a hut, and sometimes called a „Hyże” called, has the following distribution most often. Looking at the cottage from the front, we see a room with two twin windows inside, six windows each. You enter the room from the entrance hall, which is on the right side of the room. The stable is separated only by a wall from the room, in the descent from the front of the hut.

Sometimes, behind the stable under the same thatch, there is still a field where grain is threshed, and the sheaves are stored in the attic, as they say here „upstairs”.

One of the most beautiful attires is a Krakowiak’s clothing. This garment, as early as in the 16th century, was as it was until the beginning of the 20th century.

Eastern Cracovians differ from the West in general dress. In the eastern part of the Krakows land from Skalbmierz and Proszowice, men wear brown or navy tunics (suits), richly embroidered with a large collar, like a cloak, low herons, red corners on their heads and belts with numerous mini brass plates called „koluszki„. In the west, the Krakowiacy are wearing white suits, hats on their heads, and leather belts called „trzos” are also used to clog the knives.

The chin is usually embossed and knocked out with brass tumors, fastened with three or four buckles, so it used to be from the highland and Podhale highlanders. However, the double belts of the Podhale Highlanders had a kind of pocket, where the slippers were put with snuff, a pipe, a tinder, a handkerchief, etc., and a knife or pipe plug was attached to the chain hanging at the waist. Małopolska purses were often „closed down„, that is varnished, and more ceremonial (to the representative outfit) abundantly covered with shiny nails. 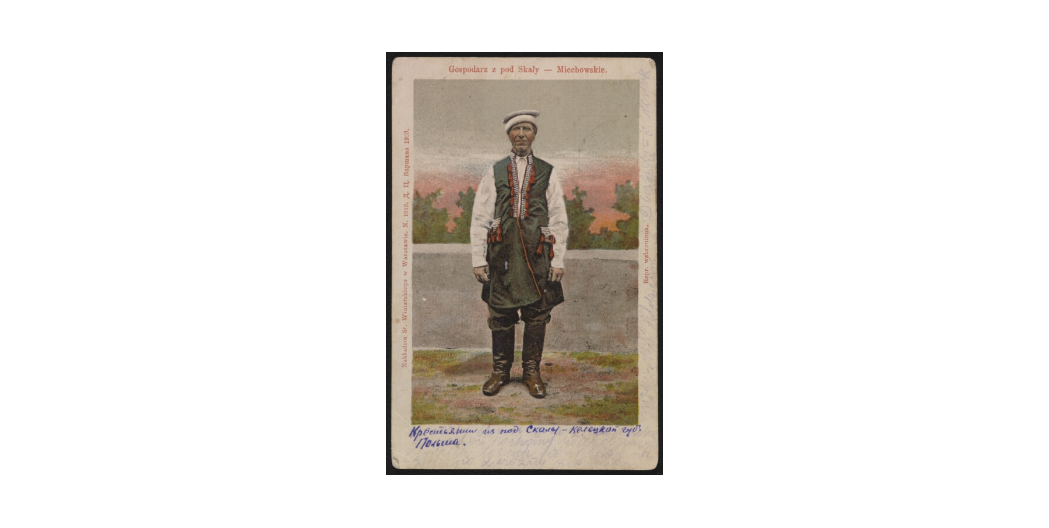 The man’s attire consists of a shirt, trousers, caftans, „sukmana” or „karazja”,  a hat or cap, or boots with tops.

Shirt made of white canvas, long knee-length, with a collar lined, embroidered on the collar, front and cuffs, and a red ribbon tied under the neck.

Pants, trousers, crinkled at the waist, wide, short, most often put on the tops. Made of light material, usually dark, sometimes light in pink vertical stripes.

Caftans are sometimes with sleeves and sometimes they are sleeveless. The caftan with sleeves is sometimes the outfit, it is sewn from a dark navy blue or black cloth, at the back is densely folded from the waist down, long to the knees, with a collar usually standing, lined with red cloth. A red cord is sewn onto the seams and hem. A caftan can be unfastened, spread over the chest or fastened with hooks under the neck, in the middle of the breast and waist. From the ancestors, the caftan was decorated with a series of pearl buttons with small loops.

The sleeveless jacket „sukmana” is worn under a ruffle, like the previous one with the slit cut to the waist (stock) and hanging loosely, usually there are 4 or 5 of them.

A sleeveless caftan along the front decorated with pearly or yellow metal buttons and silk chaps differently called red or green cocks.

The white sukmana, long outside the knee, with a standing collar, indented at the waist, lined with the front and collar with a red cloth and also with tassels on the collar and at the pockets. Insets and grips are also black. Sukmana is fastened on the chest with brass hooks. Also worn in some areas were navy-blue sukmana, similarly cut and decorated like white ruffles. 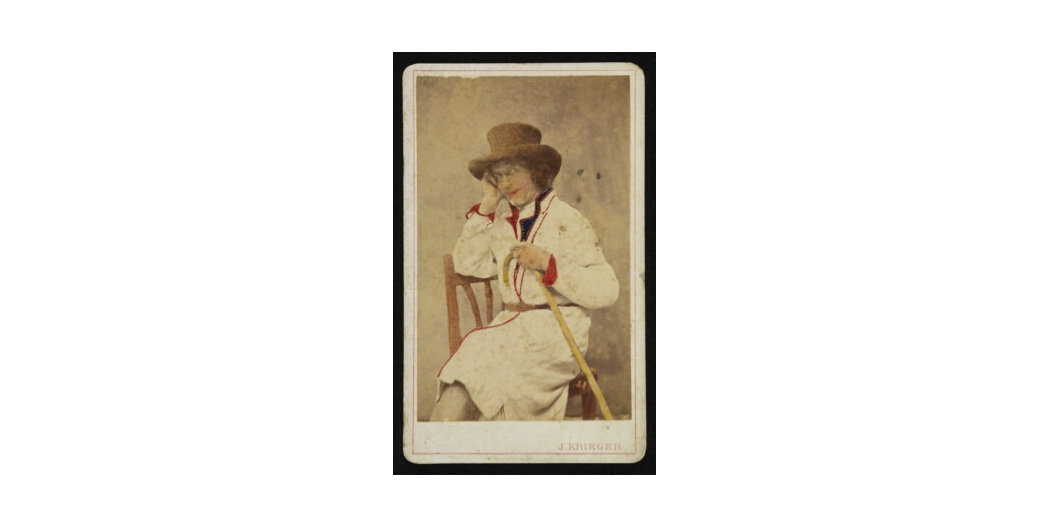 Karazyje can be richly embroidered on a collar called suka, we can also find embroidery on the front, near the pocket and at the bottom of the outfit. The pattern and selection of embroidery varies depending on the village and parish.

Formerly,Krakowiacy wore cloth hats, black ones, high, narrowing towards the top, belted with a black velvet and decorated with a buckle. At the beginning of the 20th century, black low hats were worn.

Krakuski, low red hats, wrapped in a black lamb with a peacock feather, are carried east of Krakow.

Women’s attire from the 16th century to the early 20th century, according to Seweryn Udziela, evolved, but these were not significant differences.

Krakowiacy, embroidery from the neckline of a woman’s shirt

Skirts go back to the ankles, sometimes percale, canvas, woolen and even silk, always bigger or smaller with vivid colors. In each area we can find differences in the choice of colors and flowers on the materials used for skirts and napkins.

Aprons here called zapaski  usually sewn from calico, as well as skirts. They are also white at the bottom with rich embroidery, or embroidered with tulle through which a colorful and flowery skirt shines through. 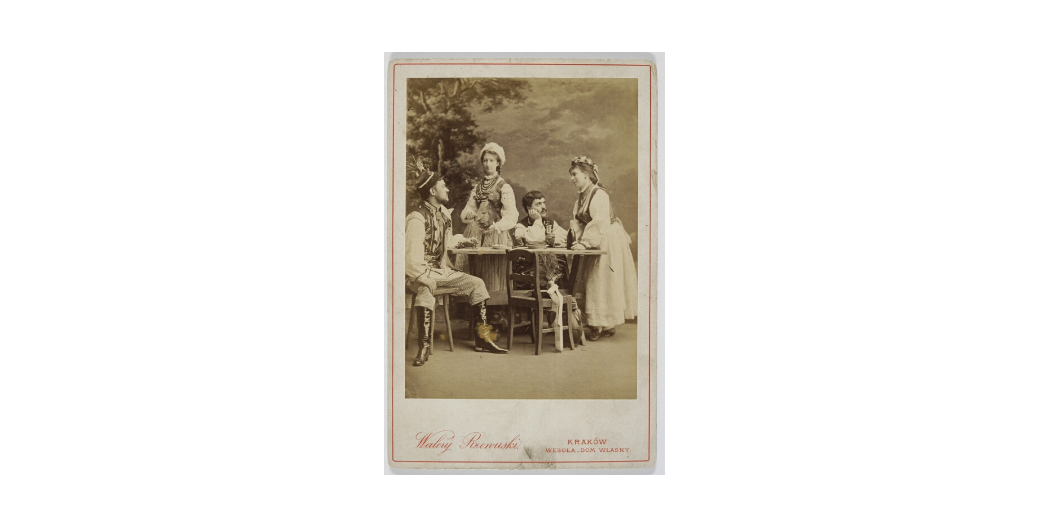 Corsets/ Gorset  are put on the shirts, short to the waist, dark navy blue, black or velvet cloth of the same color. The corset is impersonated with a red cloth. At the bottom there are embroidered, thickly overlapping kaletki, which is from 40 to 70 pieces. The wallets are sewn with a red cloth. The front of the corset is very richly decorated. Decorations vary depending on the region and the tastes of local women.

During the  summer,  on a corset also called a Serdak, women threw a light shawl called a rańcuch, usually equally richly embellished.

Corsets also included kaftan or katana, usually a dark cloth, sometimes sewn around the neck, on the chest and waist as rich as the corset.

In winter, women and girls on a katana, wore a scarf with a large wool, usually a trout, without a handkerchief thrown over her shoulders, the women did not leave the house.

Older women wear headscarves their heads. On a weekday the handkerchiefs are colored, usually red, mostly in flowers. There are white scarves beautifully embroidered worn on a holiday. 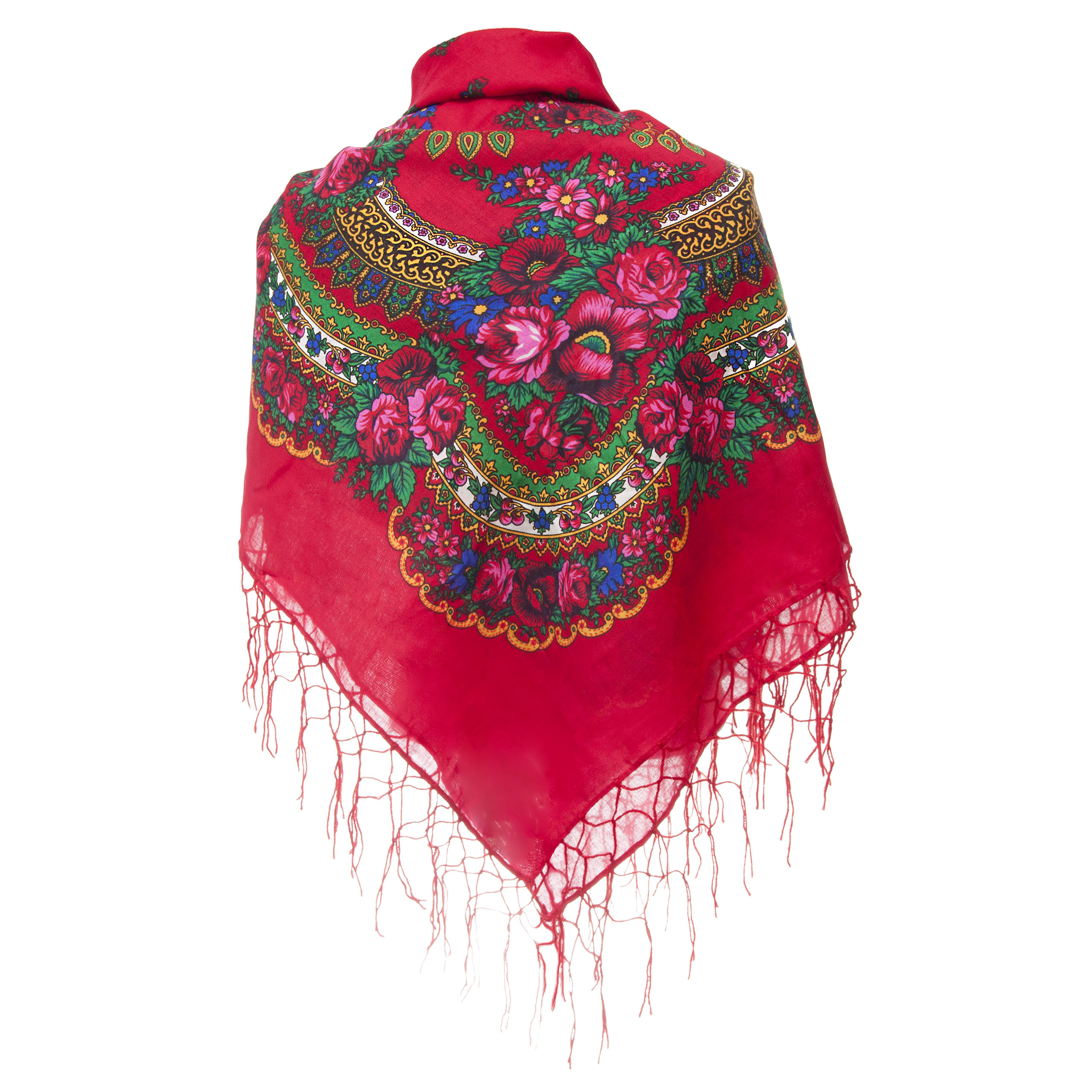 I am asking you to respect my work and not to glue text cuts without giving the source and link to this page.