Independence Day – it is a good time to share with you, the story of my great-grandfather Wincenty Machejek, born on July 15, 1895 in Pstroszyce near Miechów.

From the beginning of my adventure with genealogy, that is, from 2008, I have tried to find confirmation of the story told by my grandmother, daughter of Wincenty.
After many requests addressed to various institutions and people, and many years of searching, I was able to find a written confirmation.

The documentation was found as a result of a query carried out at the Military Historical Office in the resources of the Central Military Archive. In January 2017, I have received a registered letter with a copy of documents submitted by Wincenty Machejek in 1937-38, to the Office of the Committee of the Cross and Medal of Independence, which at the time was located in Warsaw at Al. Ujazdowska 1. 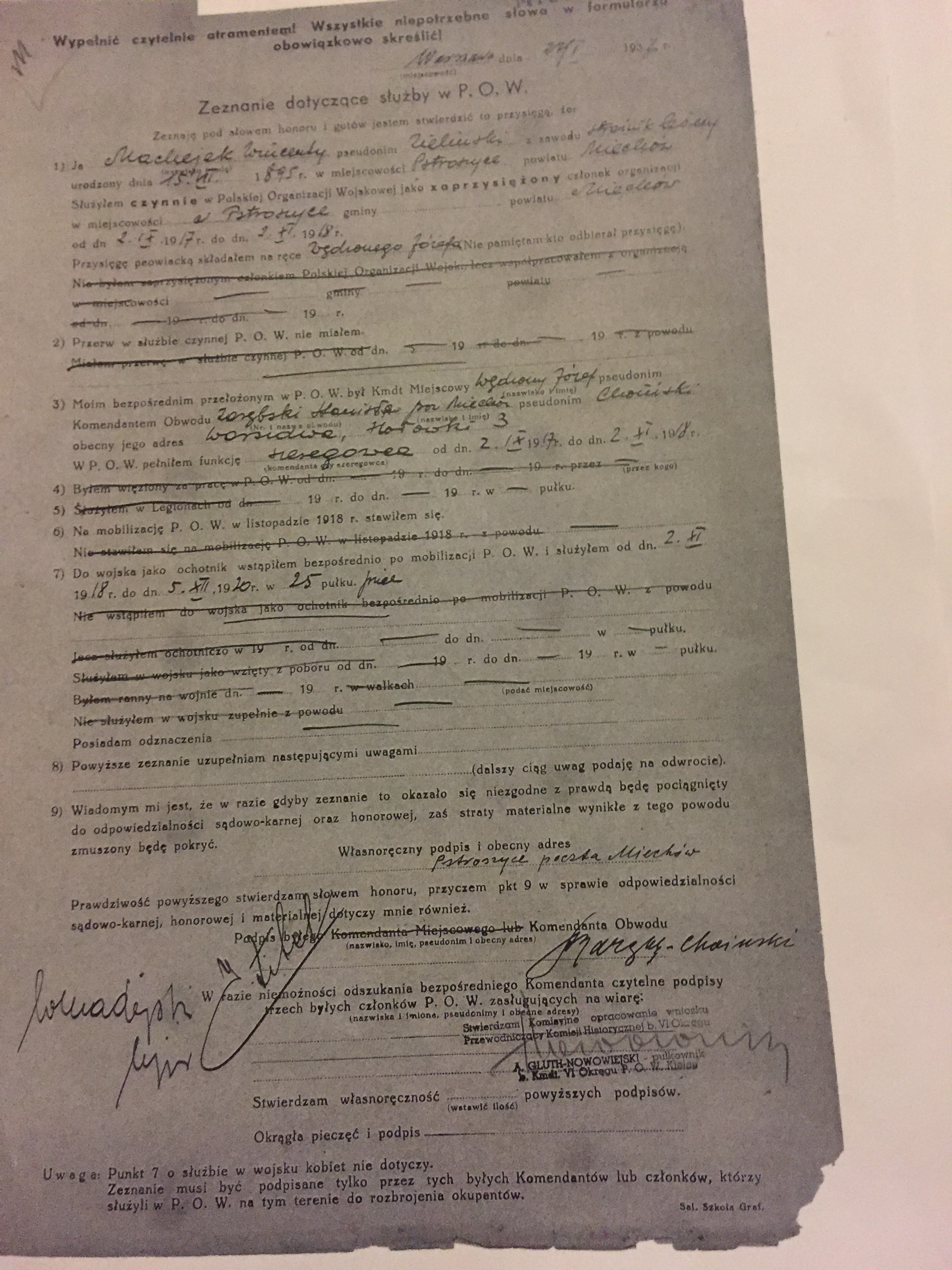 Office of the Committee of the Cross and Medal of Independence

The page header indicates that the document is:

In the upper- right hand side of the page, you can see the Miechów stamp.

Below the text of the testimony given by Wincenty Machejek can be read.

„I testify under the word of honor, and I am ready to say it by oath

I, Machejek Wincenty, nickname Zieliński, profession of a forest guard, born on July 15, 1895 in the town of Pstroszyce in the Miechów district, I served actively in the Polish Military Organization as a purchasing party member of the organization. September 2, 1917 to the 2.XI. 1918.

I took my oath on the hand of Wędzony  Józef.

My immediate superior in P.O.W. was Comd. Local Wędzony Józef. The commander of the District Zarębski Stanisław of Miechów, pseudonym Choiński, currently residing in Warsaw.

I joined the army as a volunteer immediately after the mobilization of P.O.W. and served from 2 November 1918 to the 5 December 1920 in the 25th Infantry Regiment.

The next page I received was:

An exact biography and the course of ideological and independence work.

Below is a handwritten resume. 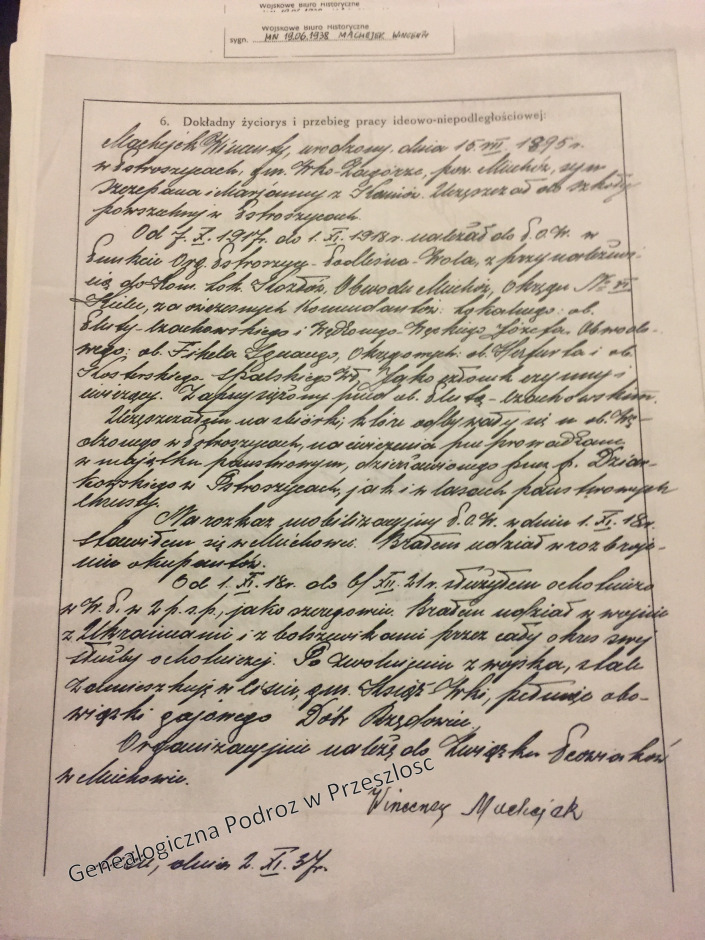 From the 7th of November. 1917 to November 2, 1918. Belonged to P.O.W. at Org. Pstroszyce, Podleśna Wola, belonging to Kom. Lok. Kozłów. Miechów District, District Nr. VI Kielce for ordered Commanders: local ob. Pluta-Czachowski and Wędzony-Węcki-Józef. Peripheral: ob. Fihel Ignacy, District: ob. Herfurt, Kosterski, Spalski  Wł. as an active and exercising member. Sworn in before Pluta -Czachowski. I have attended gatherings that took place at ob. Wędzony in Pstroszyce, for exercises conducted on state property leased by Dziarkowski in Pstroszyce, as well as in state forests.

On mobilization order P.O.W. on November 1, 1918, I have arrived in Miechów. I took part in the dismantling of the occupiers. From November 1, 1918 to December 6, 1921. I served voluntarily in W.P. in 2 p.s (?). p, as a private. Throughout my voluntary service, I took part in the war with Ukrainians and the Bolsheviks. After being released from the army, I live in Cisie, gm. Książ Wielki, fulfilling the duties of the Rzędowice estate. Organizationally, I belong to the „Peowcy„ Union in Miechów.

The next page I have received, concerns a:

Decision to give the distinction. 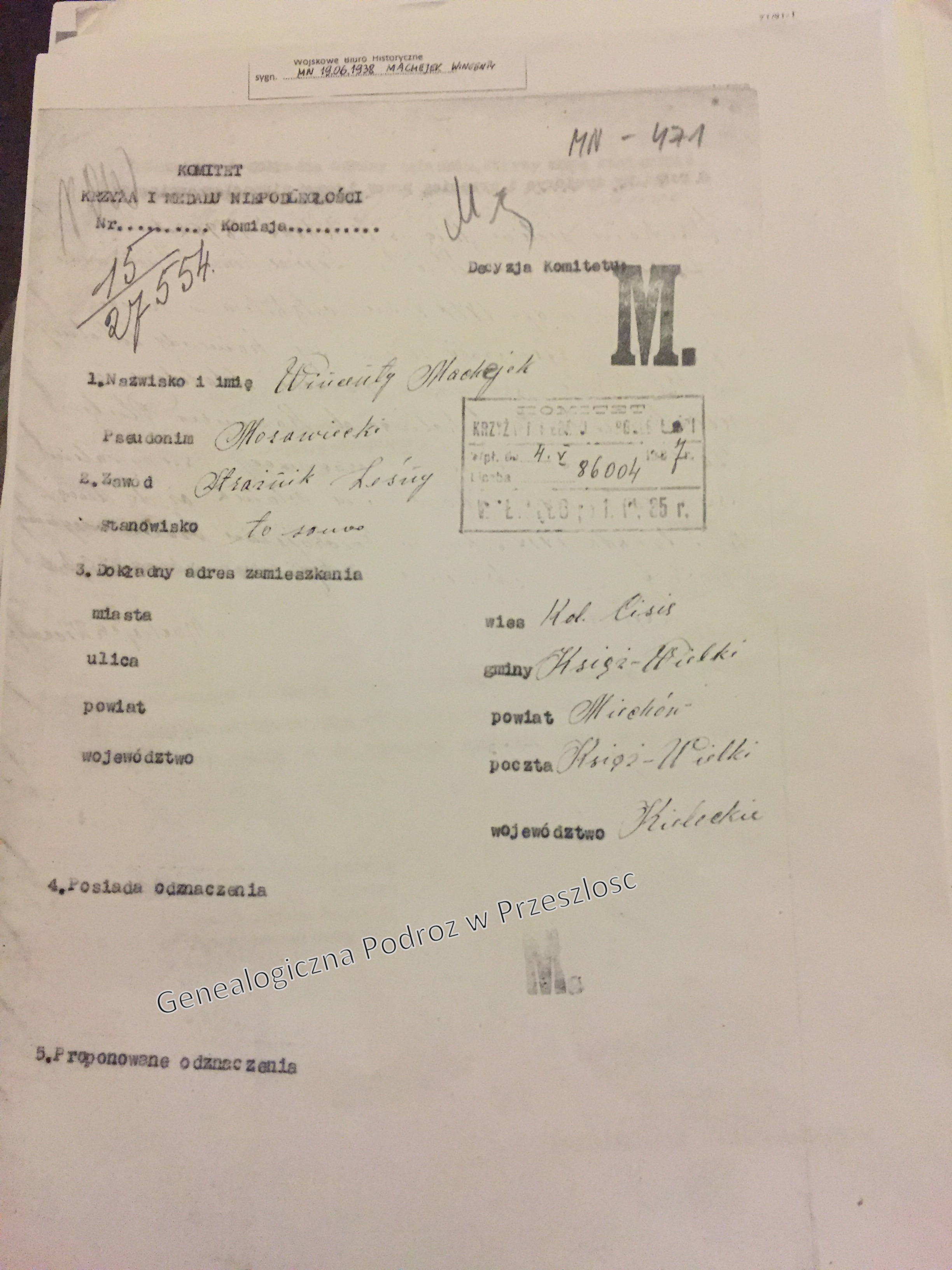 Seal of the Committee of the Cross and Medal of Independence.

(below the stamp with the letter M)
M.

The next page of the document is a:
Questionnaire
for receiving a diploma and an ID card. 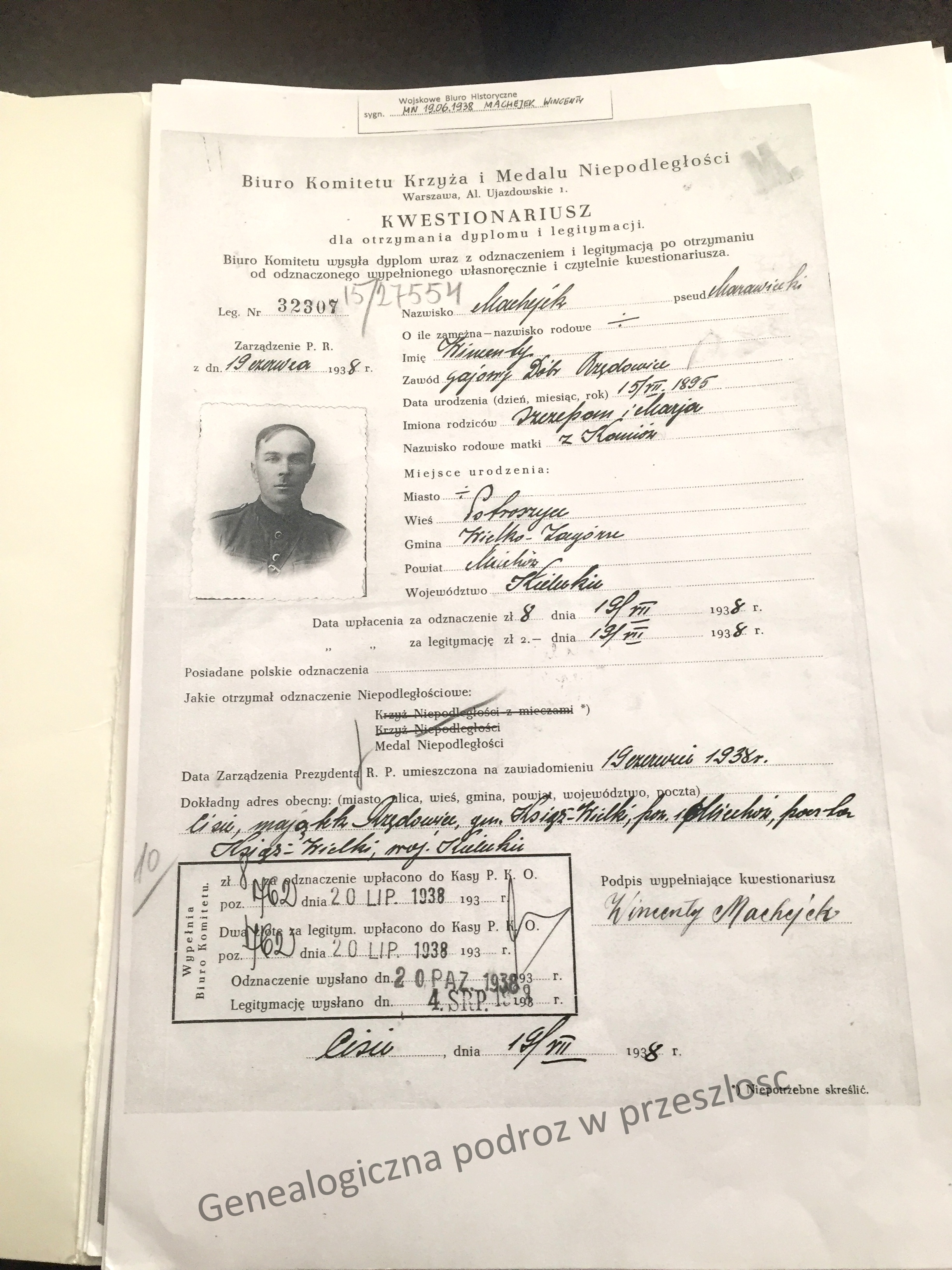 These documents showed me further pieces of history from the life of my great-grandfather, who fought for the independence of Poland.

I would like the informations about Wincenty Machejek fighting for the freedom of Poland, our homeland from the partitions, to survive, and be passed on to the future generations.

I am still looking, and I still hope that even more new discoveries are still waiting for me.

P.O.W. – The Secret Military Organization was established in August 1914 on the initiative of Józef Piłsudski. The organization’s goal was to fight against the Russian invaders.