The story of Lislaughtin, Ireland

My  genealogical experience, first in 2019

Road N 69 between Foynes and Tarbert 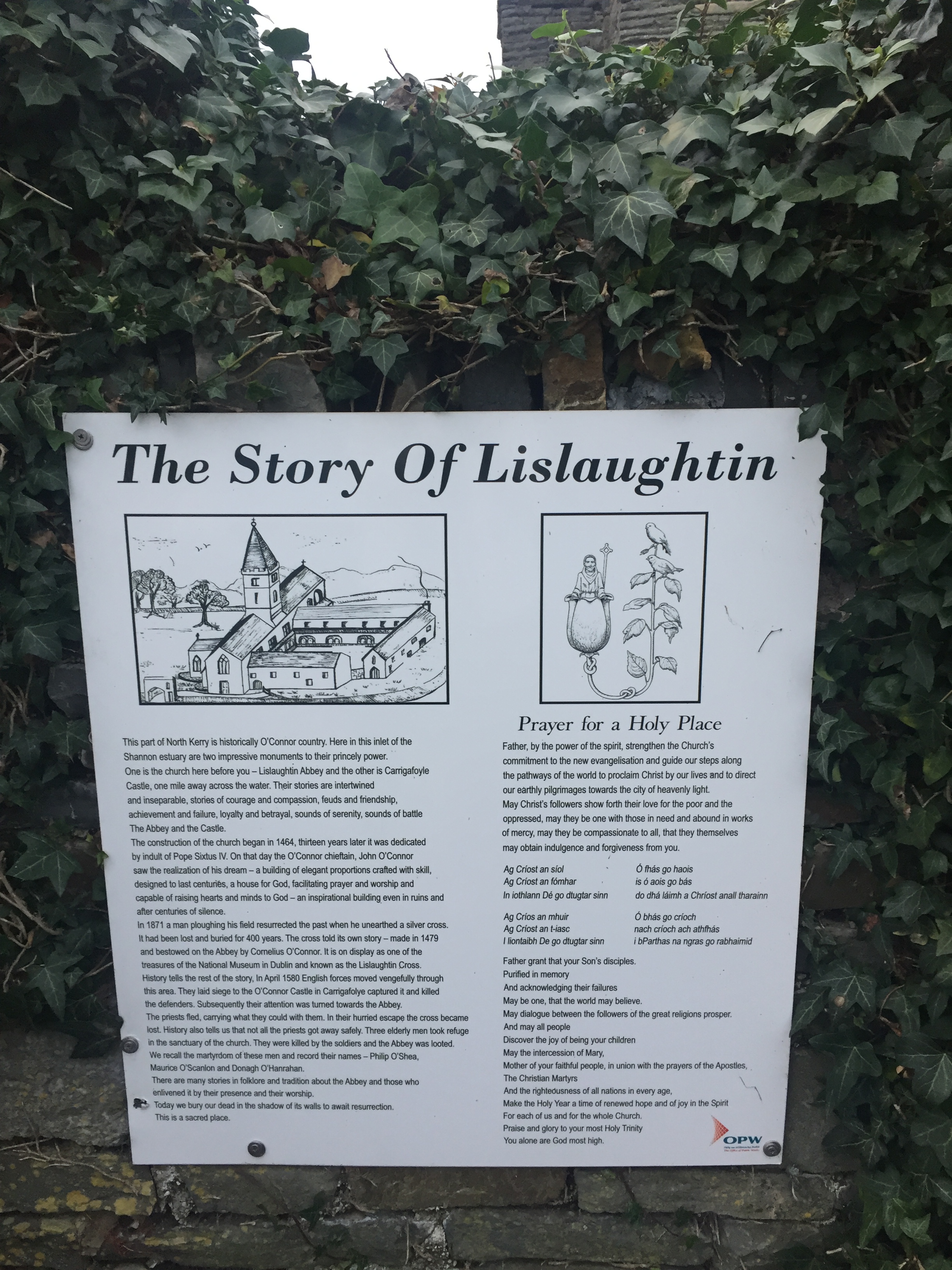 „The story of Lisaughtin. The part of North Kerry is historical O’Conner country. Here is this inlet of the Shannon estuary are two impressive monuments to their princely power.

One is the church here before you -Lisaughtin Abbey and the other Carrygafoyle Castle, one mile away across the water . Their stories are intertwined and inseparable, stories of courage and compassion, feuds and friendship, achievement and failure, loyalty and betrayal, sounds of serenity, sounds of battle The Abbey and the Castle.

The construction the church began in 1464, thirteen years later it was dedicated by indult of Pope Sixtus IV. On that day the O’Connor chieftain, John O’Connor saw the realization of his dream – a build of elegant proportions crafted with skill, designed to last centuries, a house for God,  facilitating, prayer and worship and capable of raising hearts and minds to God- an inspirational building even in ruins and after centuries of silence.

In 1871 a man ploughing his field resurrected the past when he unearthed a silver cross. It had been lost and buried for 400 years. The cross told its own story–made in 1479 and bestowed on the Abbey by Cornelius O’Connor. It is  on displayed ad one of the treasures of the National Museum in Dublin and know and the Lislaughtin  Cross.

History tell the rest of the story. In April 1580 English forces moved vengefully through this area. They laid siege to the O’Conner Castle in Carrigafoyle captured it and killed the defenders. Subsequently their attention was turned towards the Abbey.

The priests fled, carrying what they could with them. In their hurried escape the cross became lost. History also tells us that not all the priests got away safety.  Three elderly men took refuge in the sanctuary of the church. They were killed by the soldiers and the Abbey was looted.

We recall the martyrdom of these men  and record their names- Philip O’Shea, Maurice  O’Scanlon and Donagh O’ Hanrahan.

There are many stories in folklore and tradition about the Abbey and those who enlivened it by their presence and their worship.

Today we bury our dead in the shadow of its wall to wait resurrection.

This is a scared place. „ 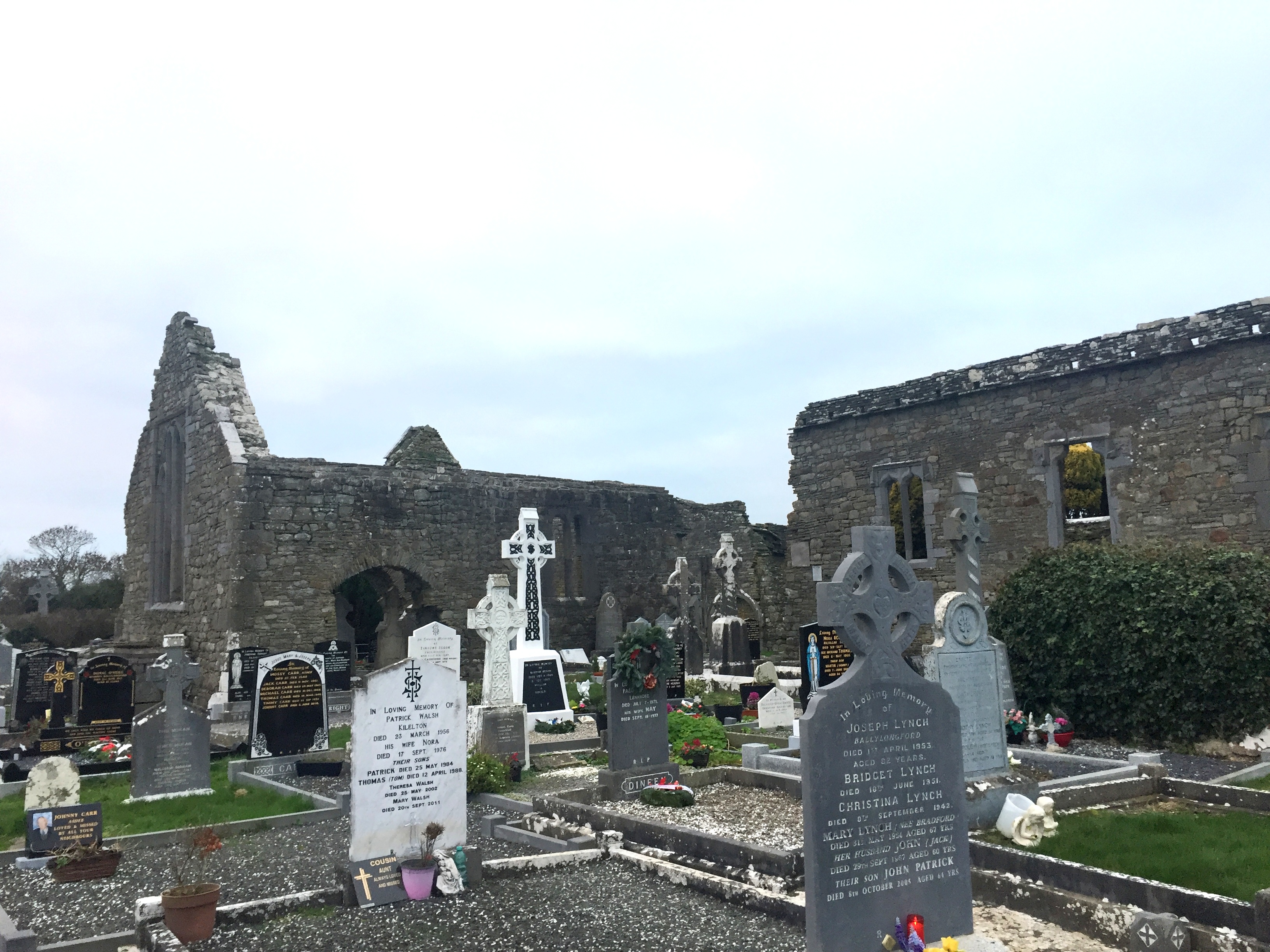 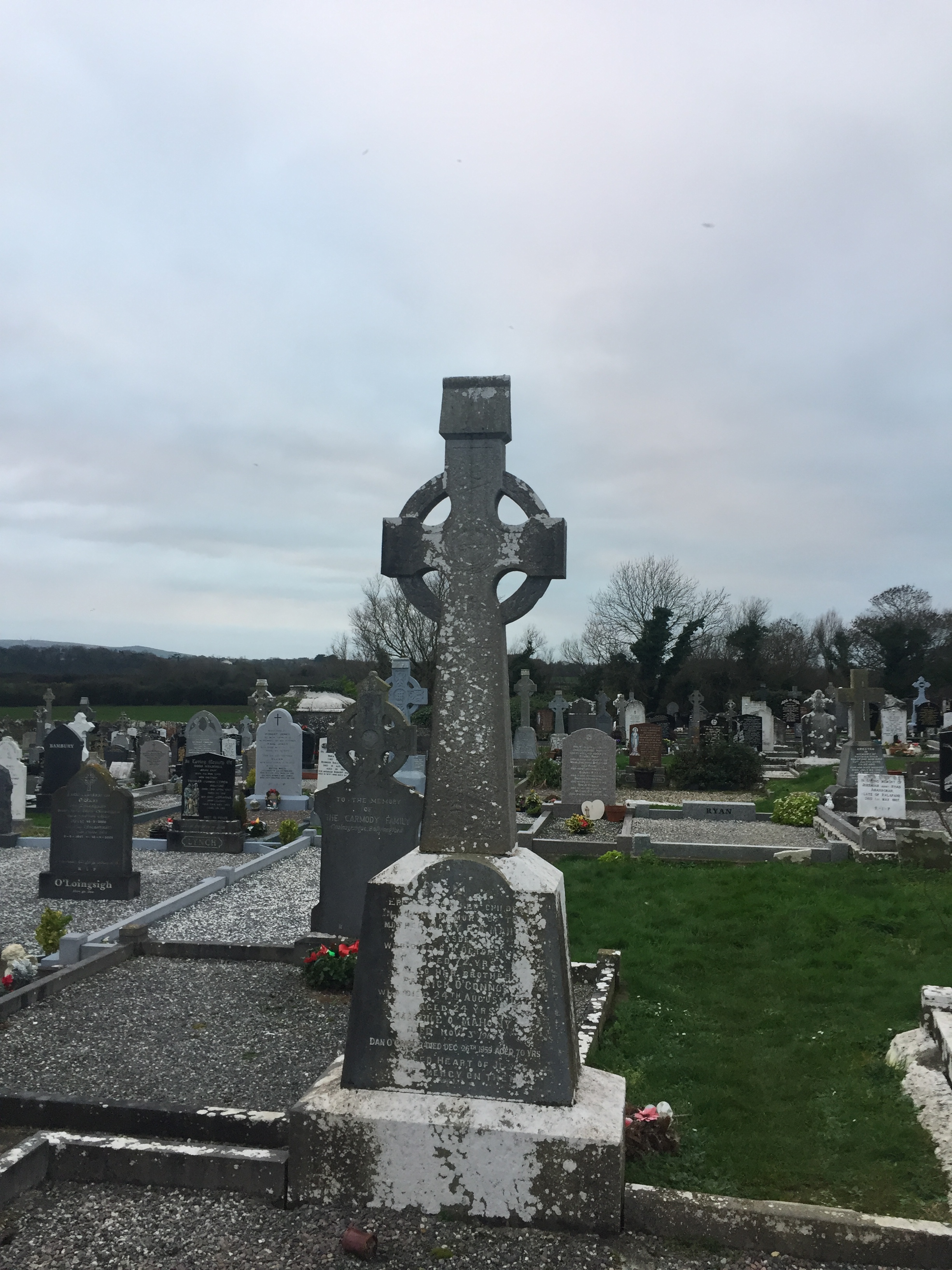 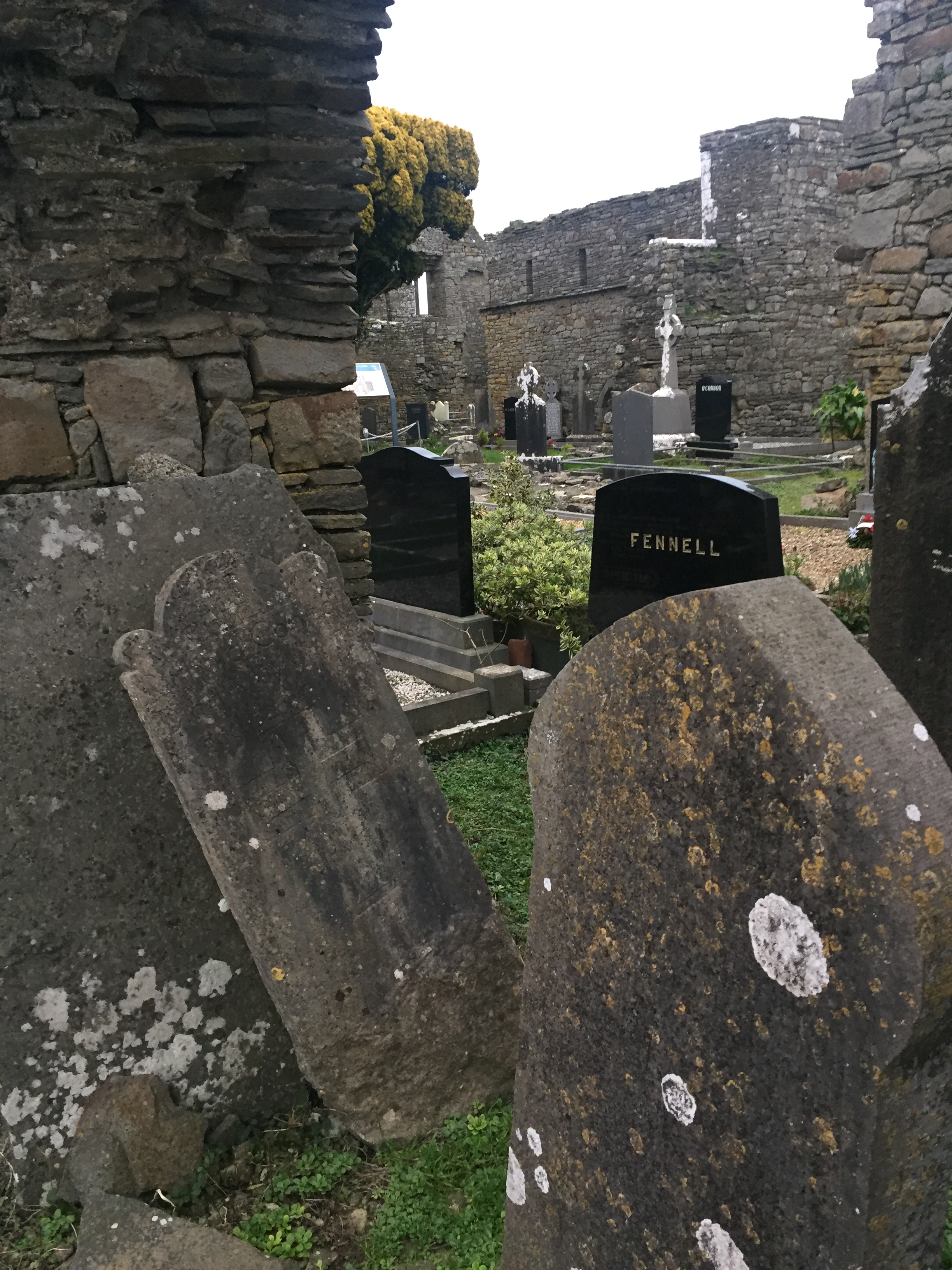 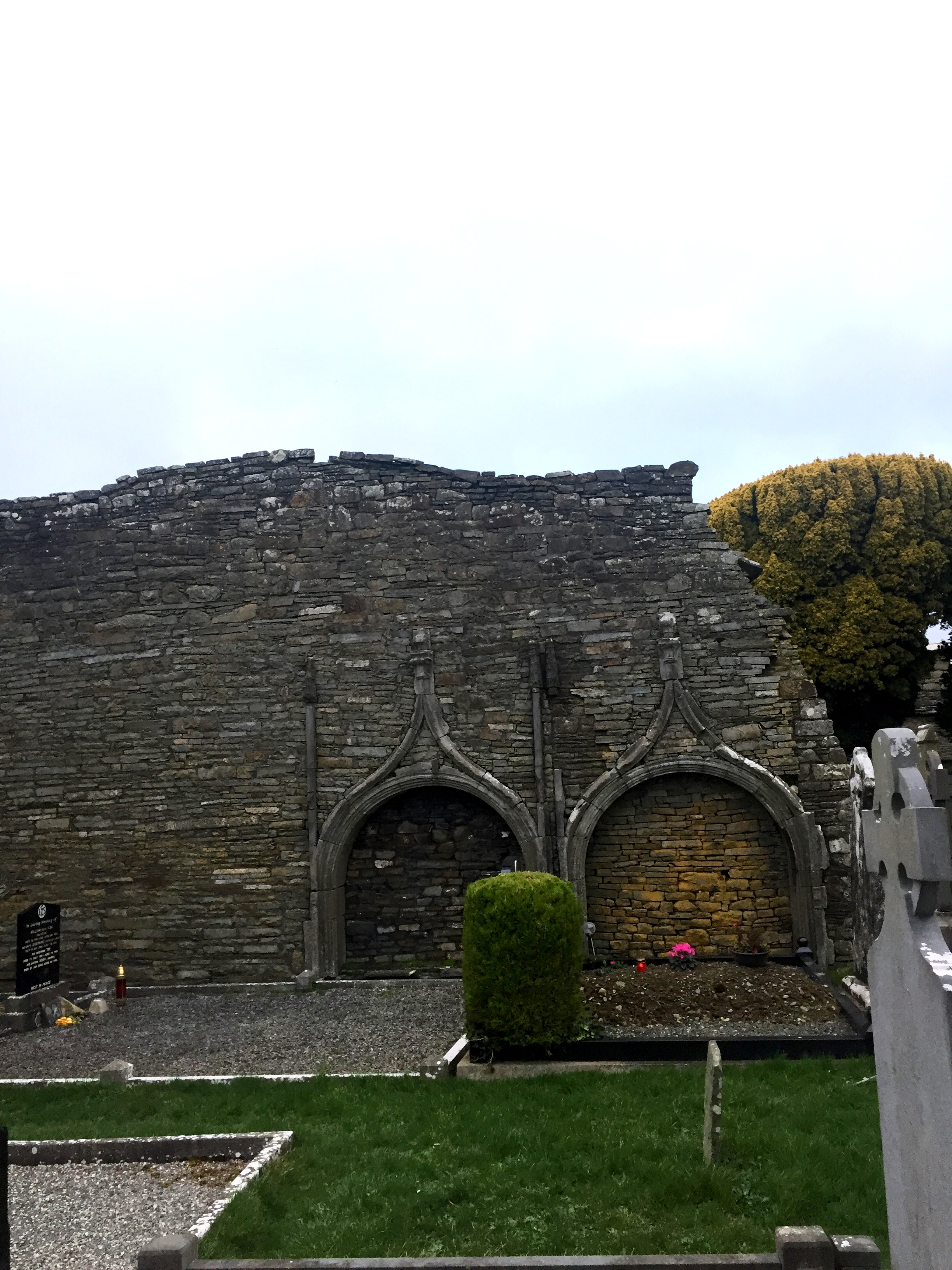 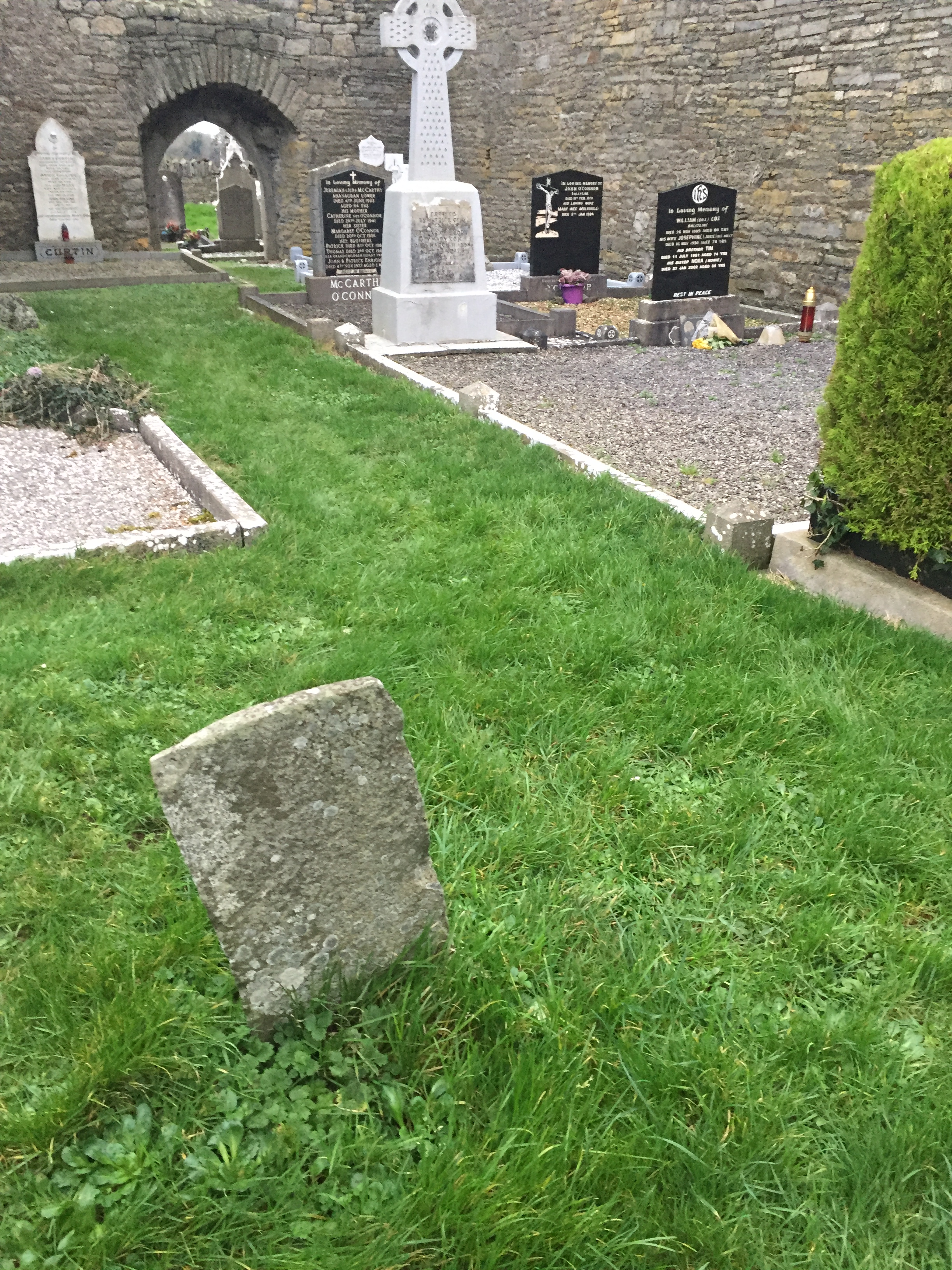 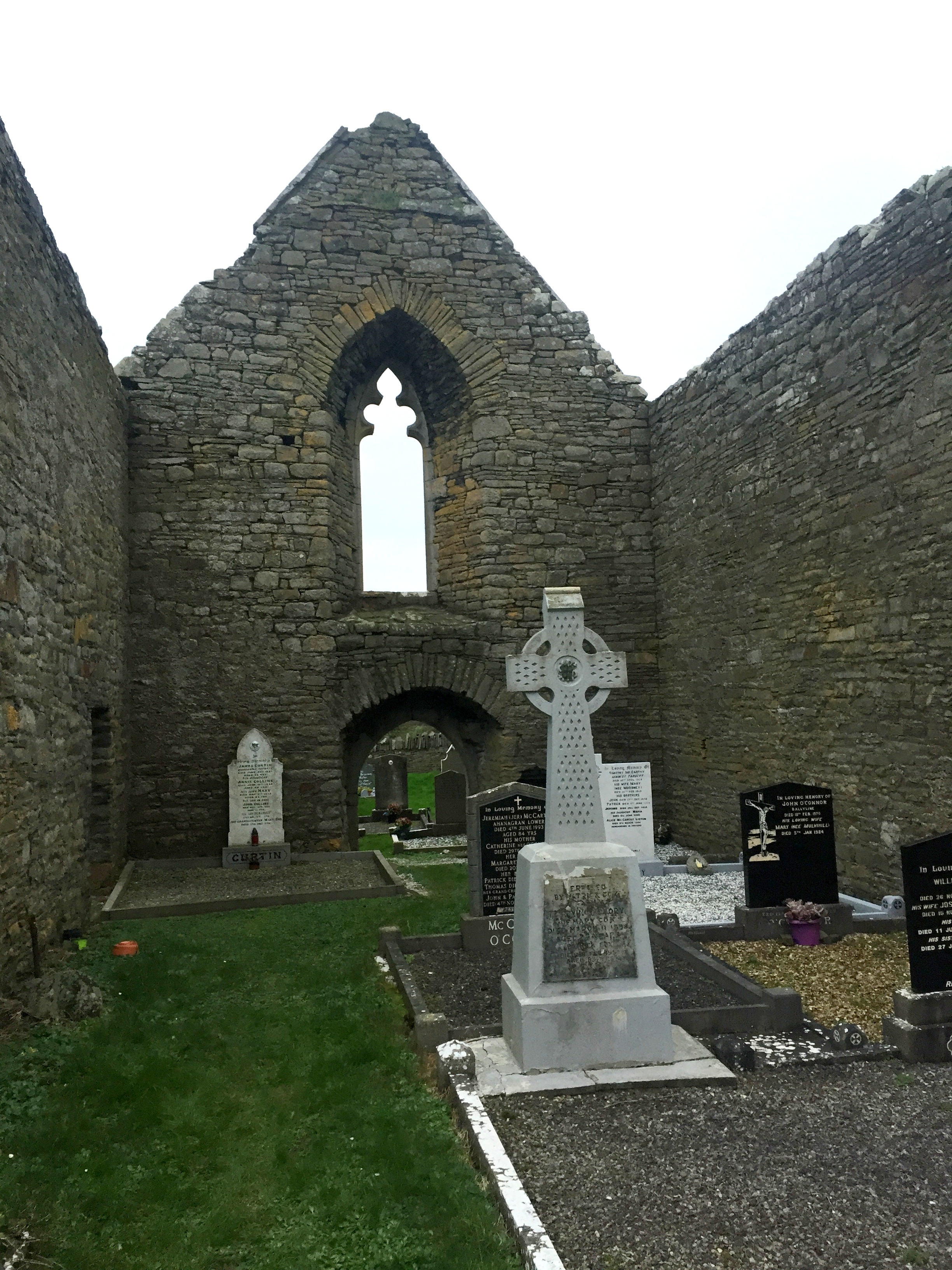 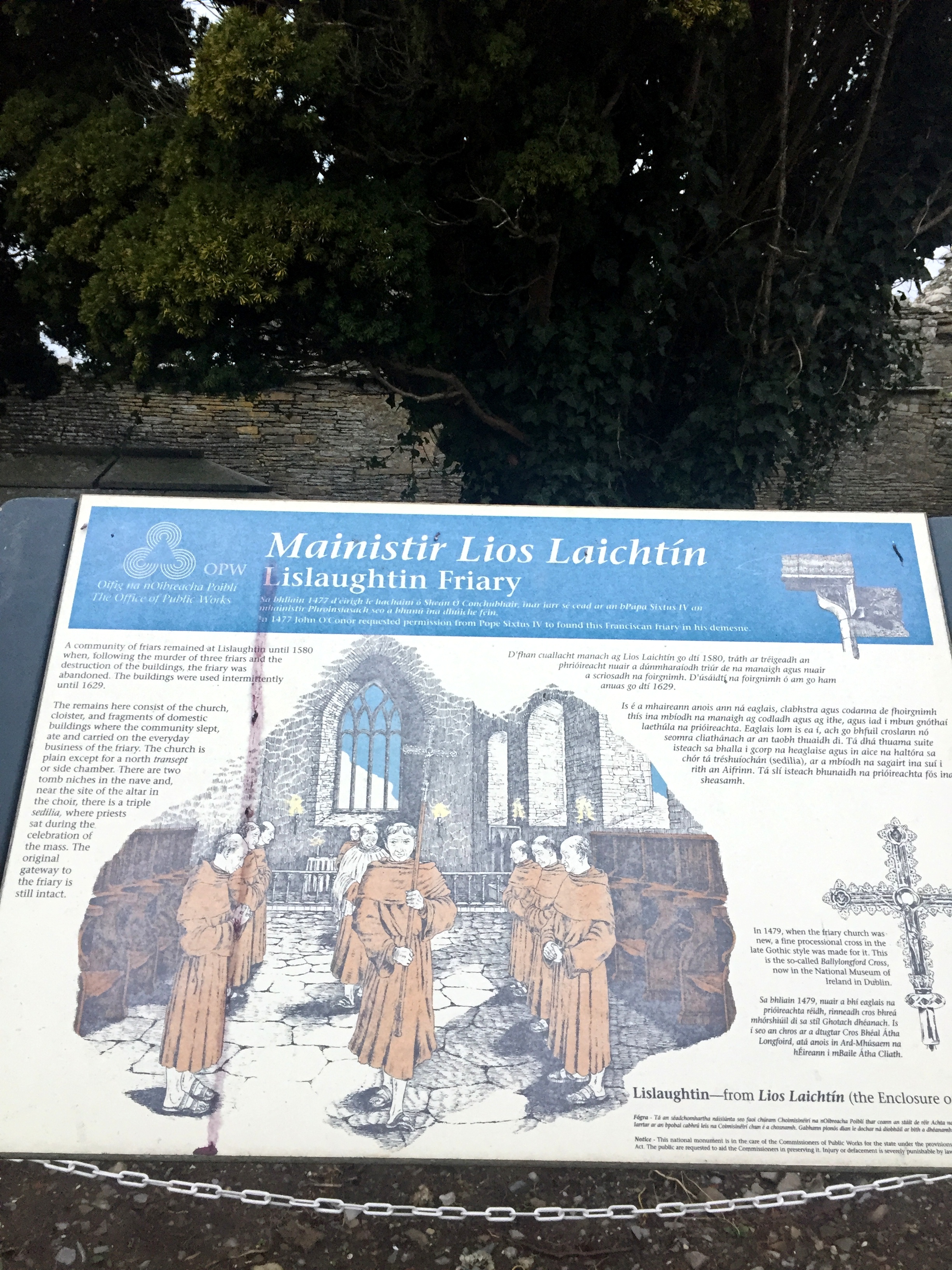 ” A community of friars remained and Lislaughtin  until 1580 when, following the murder of three friars and the destruction of the buildings, the friars was abandoned. The buildings were used intermittently until 1629.

The remains here consist of the church, cloister, and fragments of domestic buildings where the community slept, ate and carried on the everyday  business of the friary.  The church is plain except for a north transept  or side chamber. There are two tomb niches in the nave and, near the side of the altar in  the choir, there is a triple sedilia, where priests sat during the celebration of the mass. The original gateway to the friary is still intact. „ 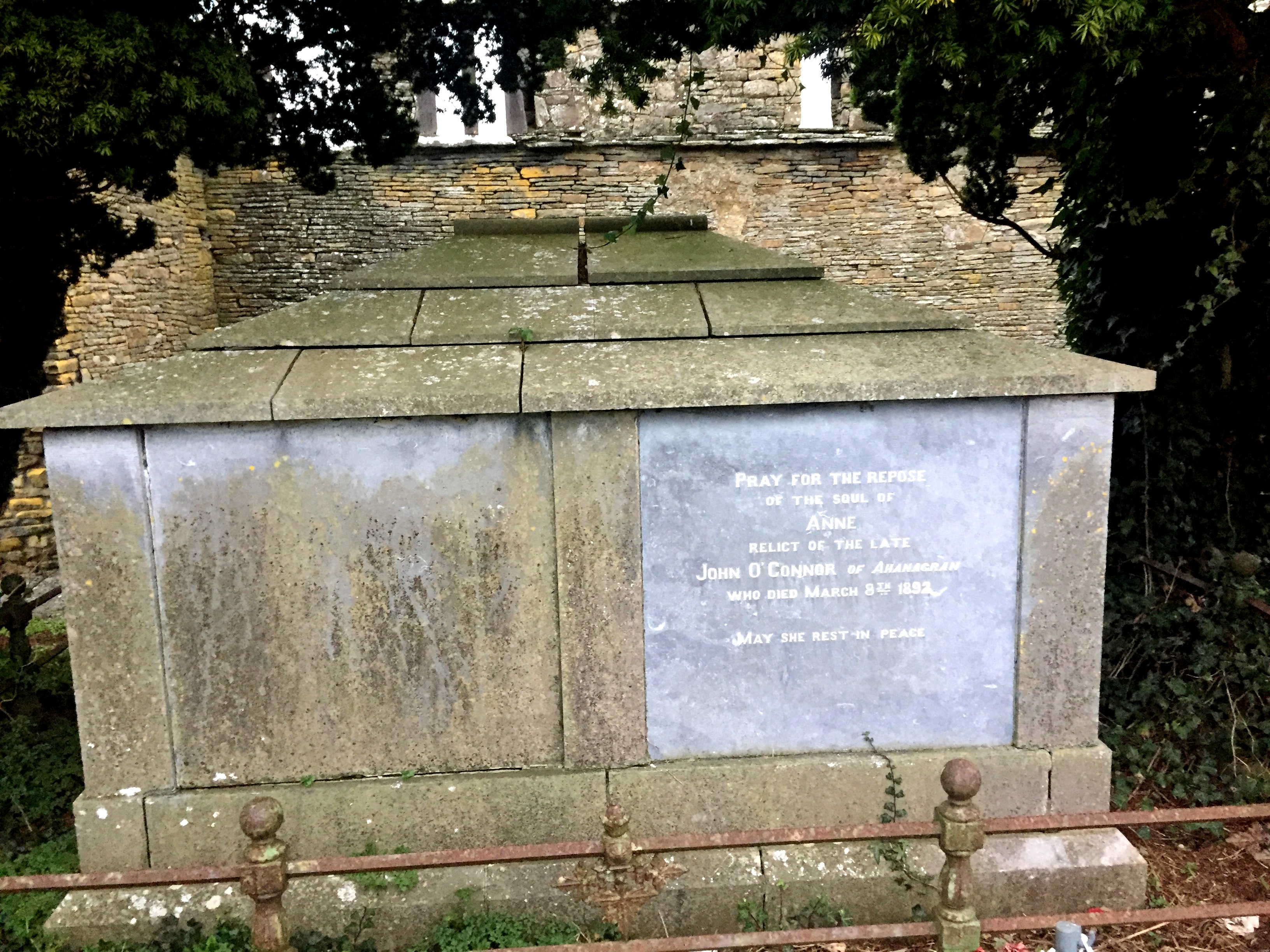 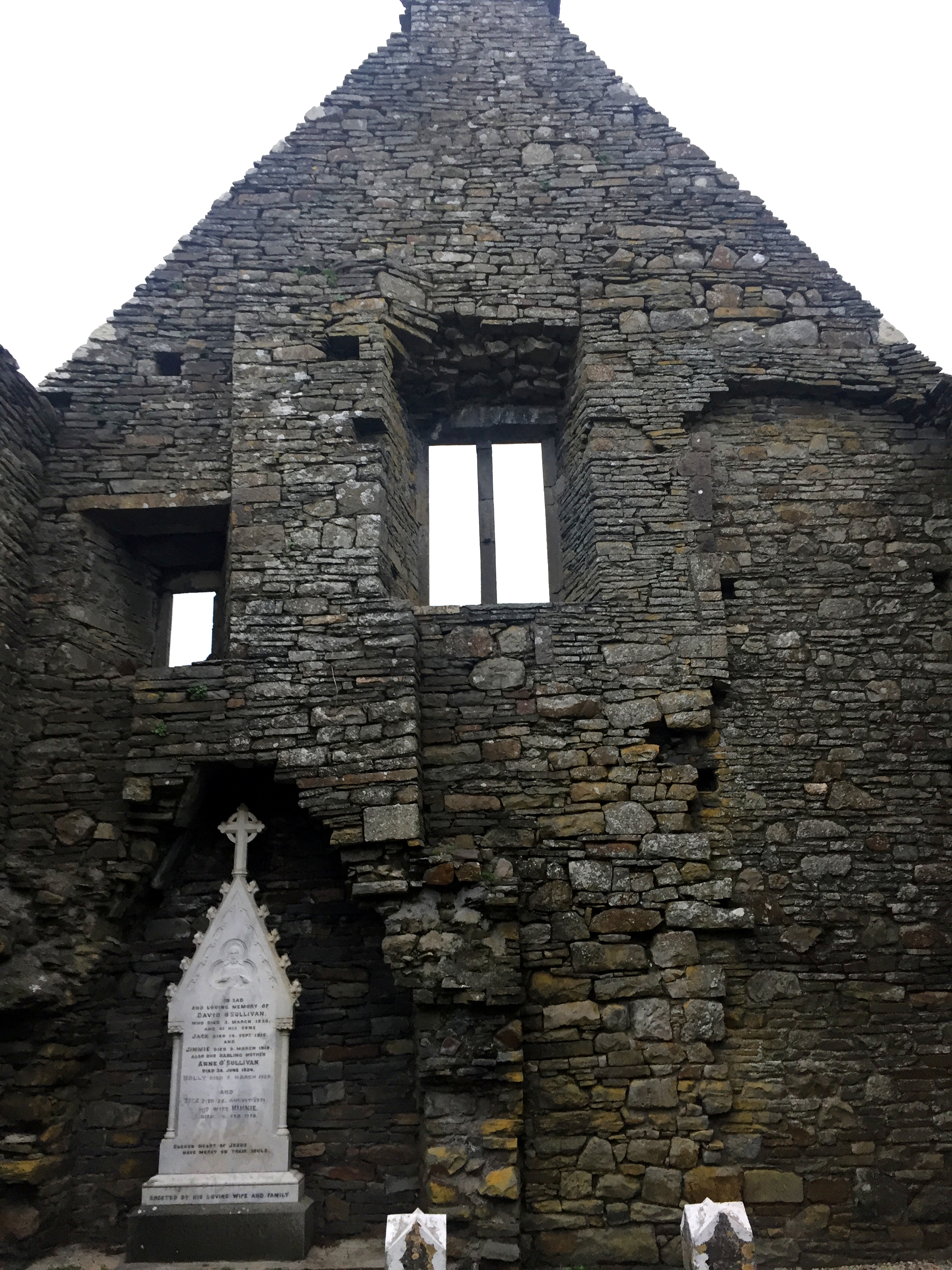 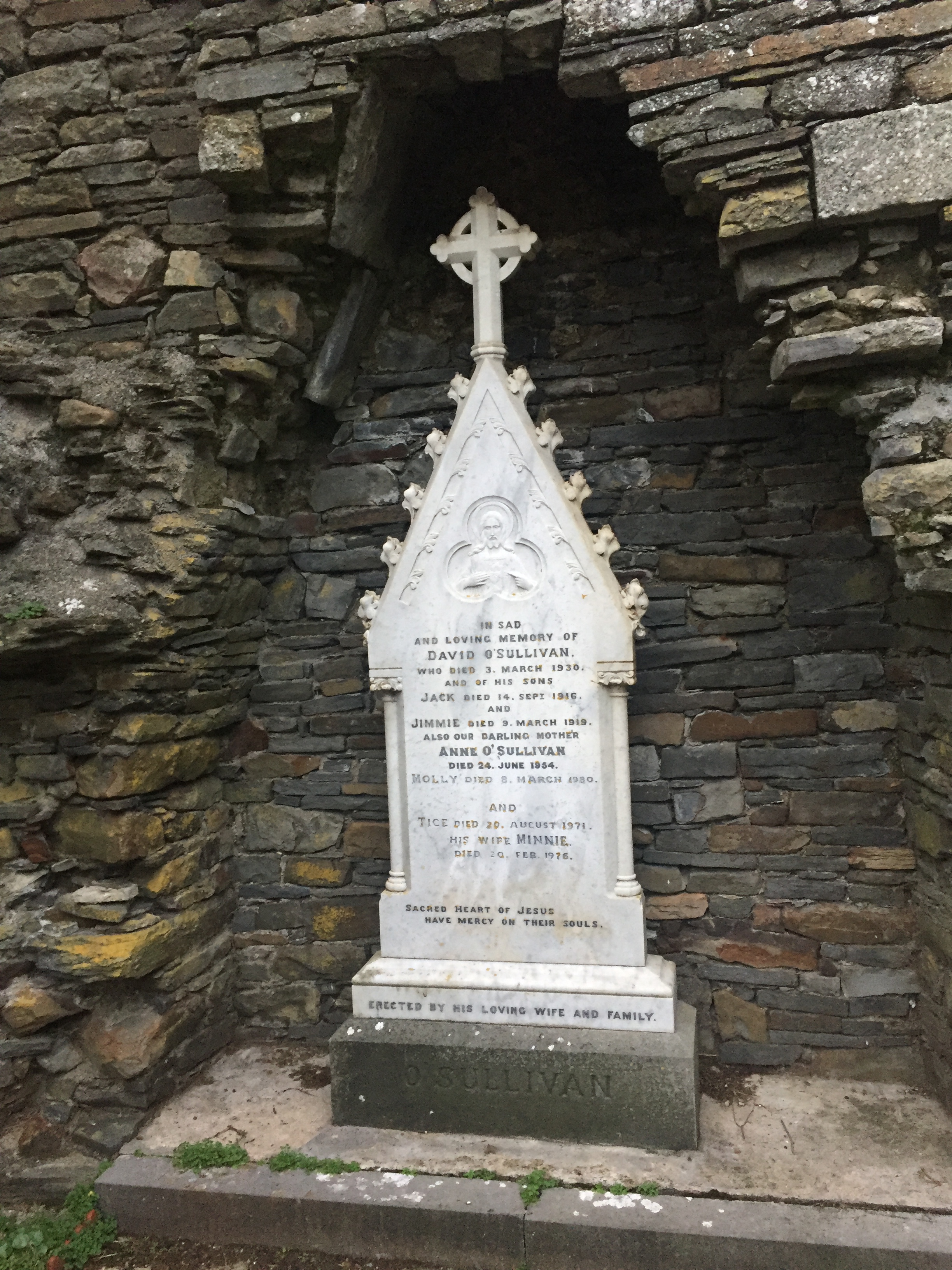 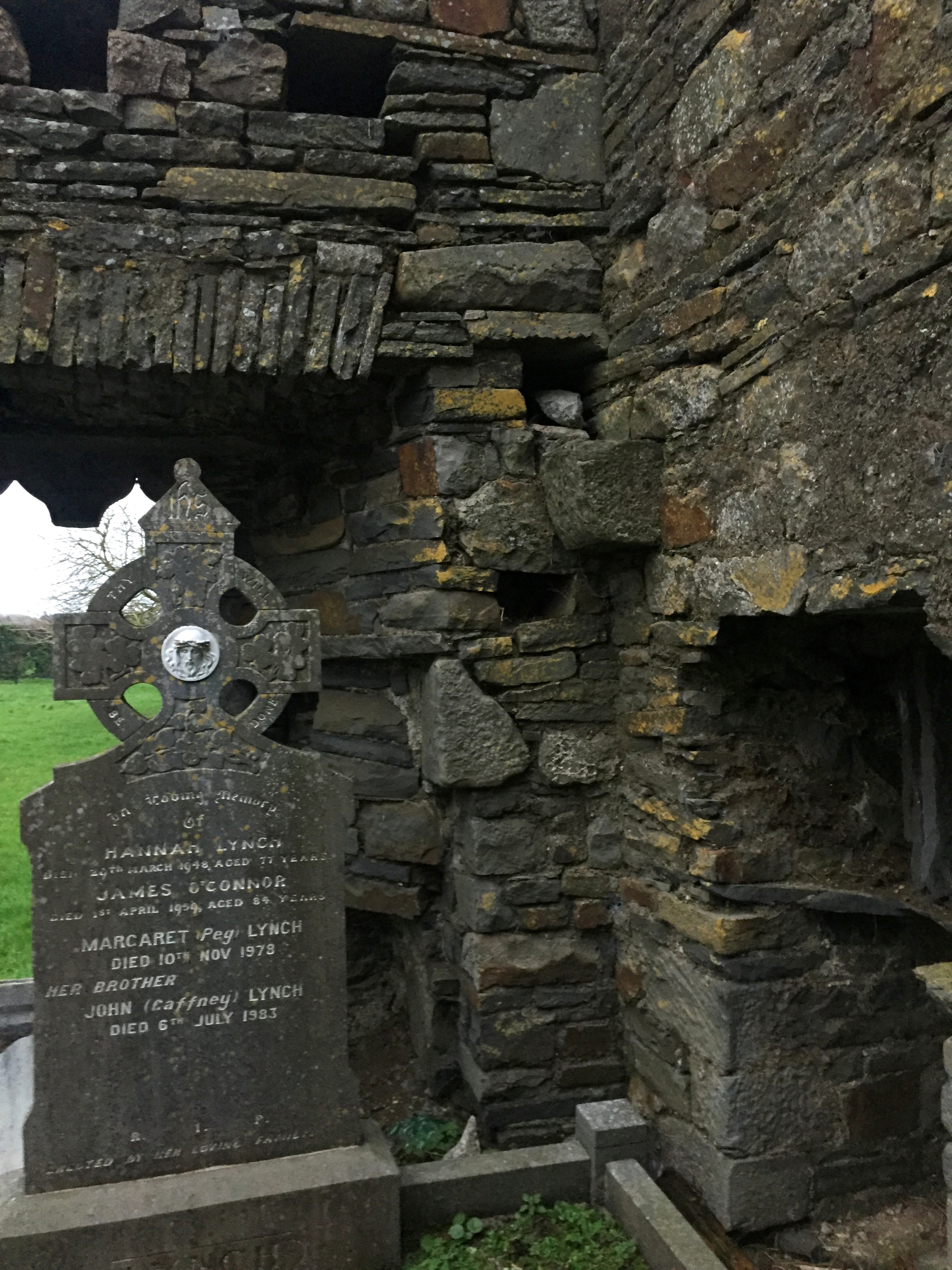 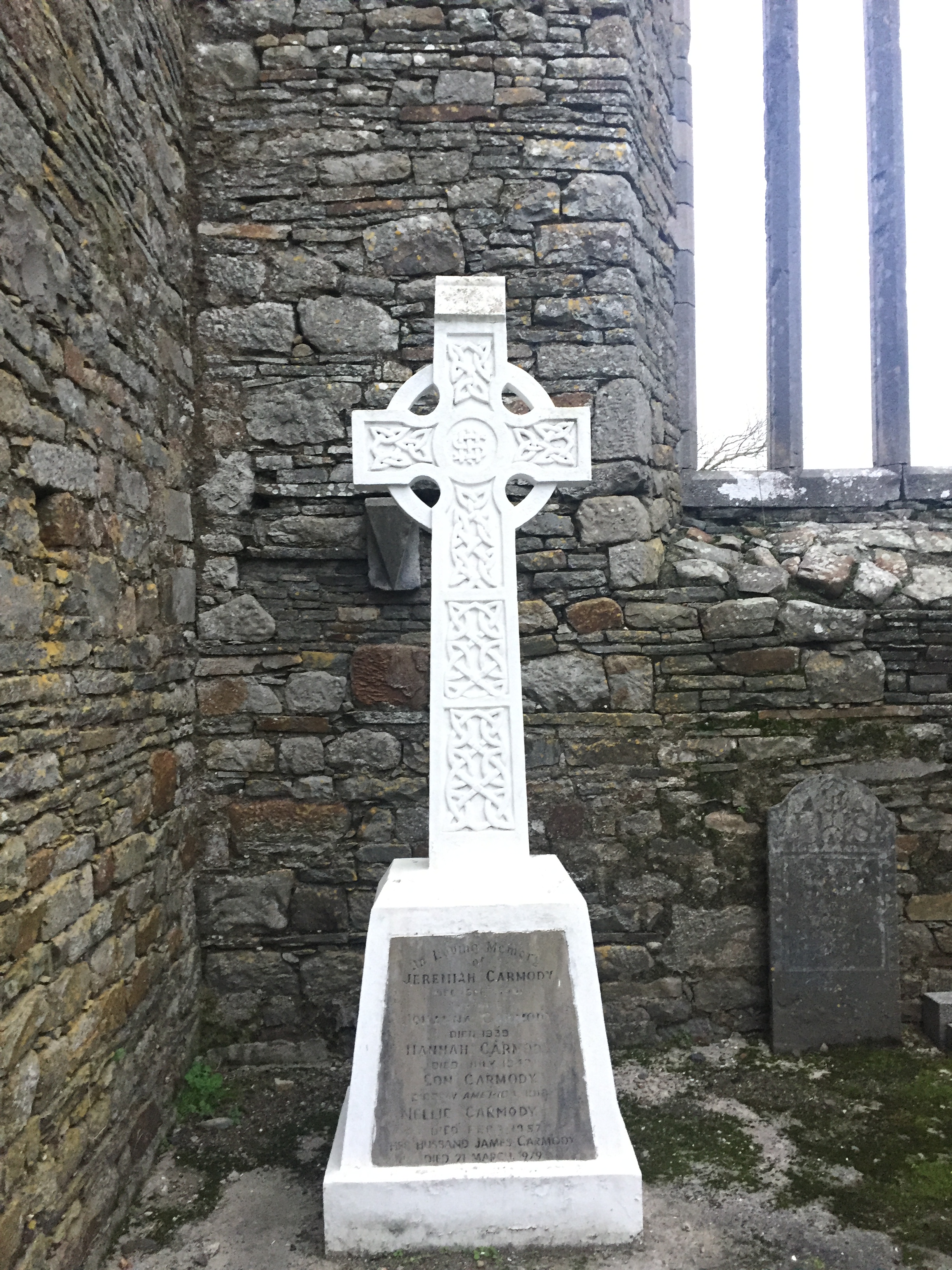 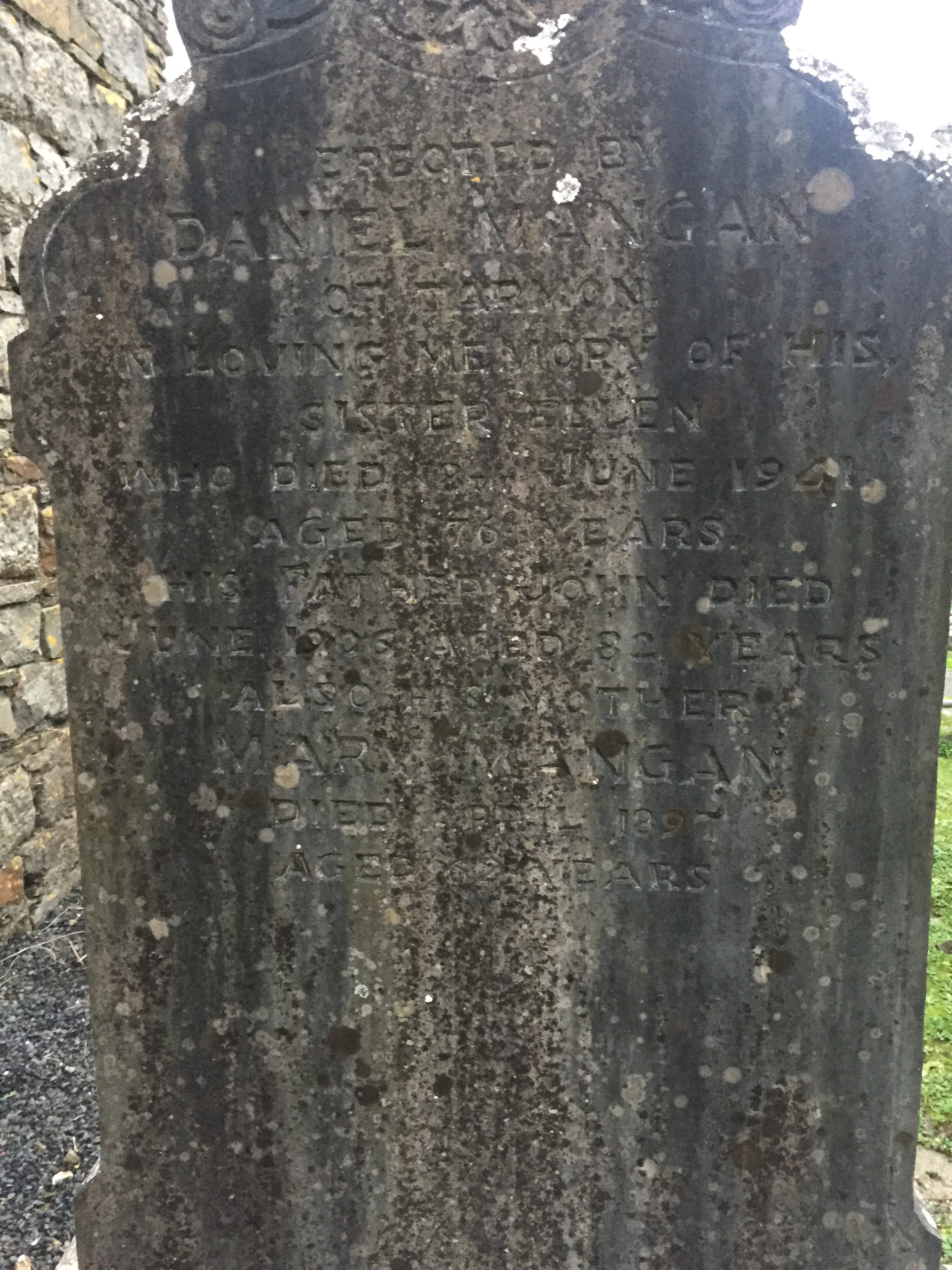 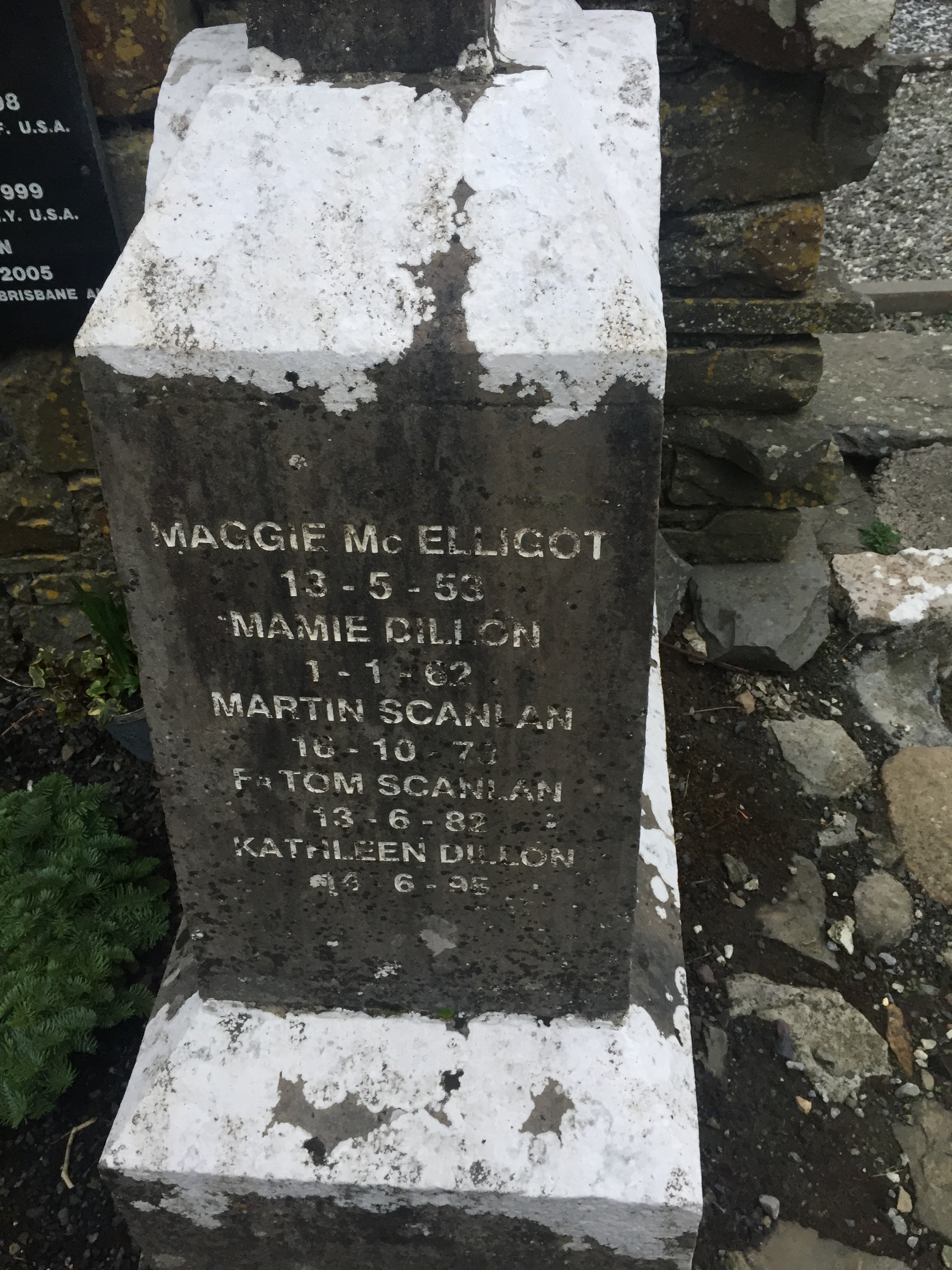 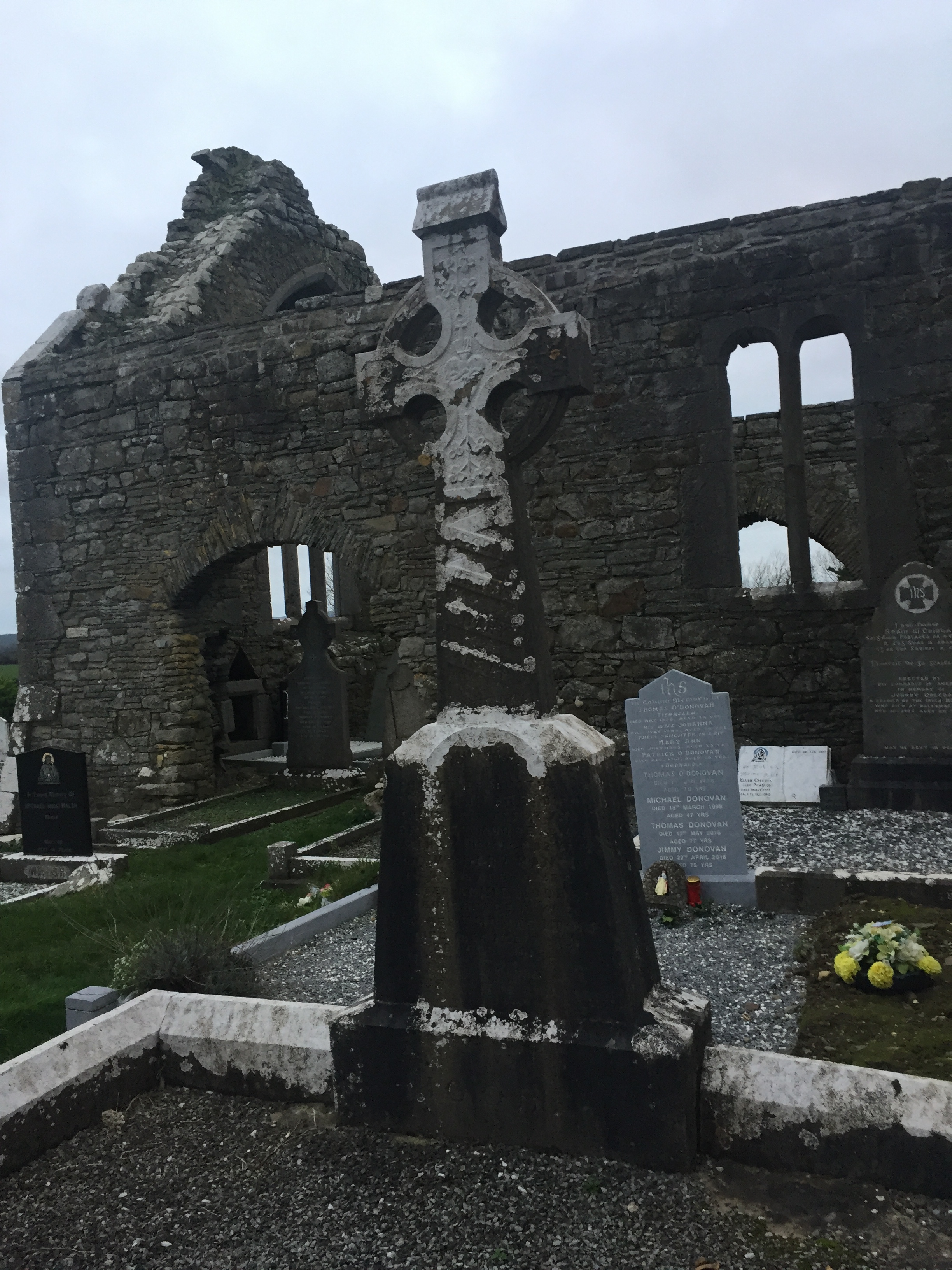 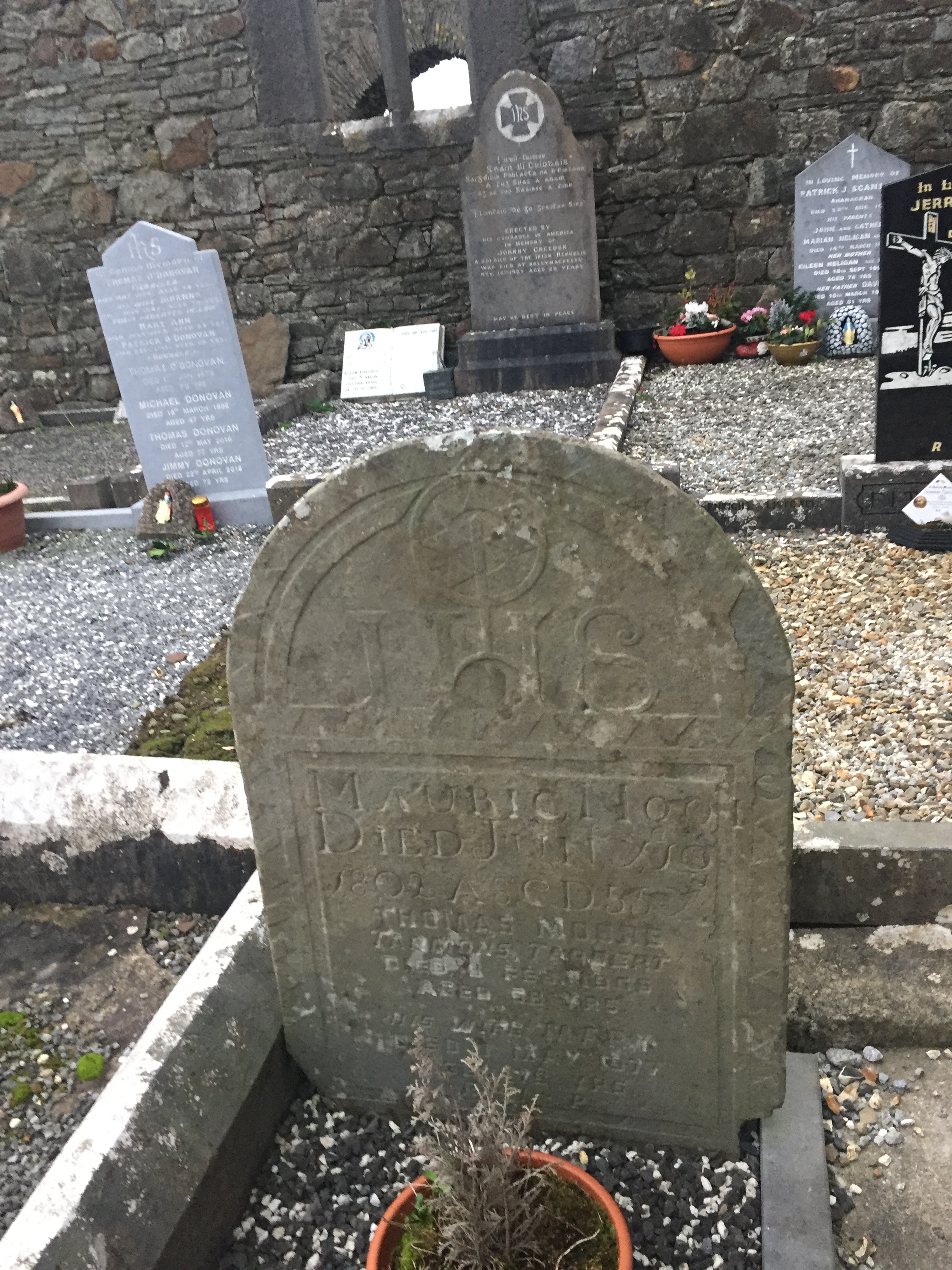